I cannot remember what my dad told me about his POW days in Nagasaki, except for the horrific brutal treatment he and his fellow prisoners received at the hands of the Japanese.  He did tell me that he was present in the camp when the A Bomb fell, and that he felt the tremendous heat and shock wave.  He said that at the time of the bomb’s detonation, he was walking in the shadow of a huge smoke stack of some kind and that this sheltered him from the effects of the explosion to some degree.  I also remember him telling me that he helped his fellow wounded prisoners who were not as lucky as he.

My dad told me that after the war when he left Japan, he was send back to Indonesia as a infantryman to fight against the Indonesians. His nickname was “pong” as he liked to play ping pong. Then when the Dutch government recalled their soldiers he, my mother and I, along with his fellow Dutch soldiers were repatriated to Holland. We went on a ship called the Cameronia. After arriving in Holland, we lived first in Zeist and then in Utrecht as I recall. 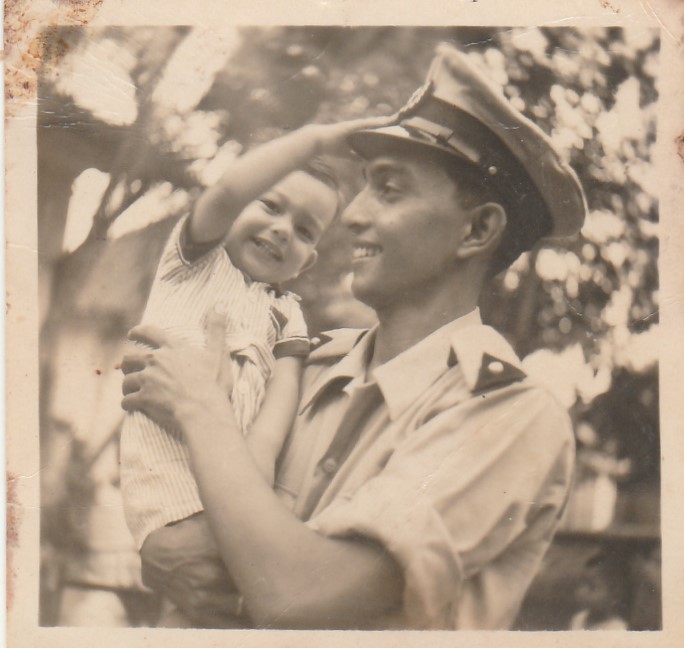 After retiring from the Dutch Army, he decided to immigrate to America because we had some relatives who lived there already and because my mom had Asthma and for her health the climate in America was better.  We settled in San Diego where he lived until his death.  For the 5 years prior to dying, he suffered terribly from cancer which ultimately caused his death.  The doctor attributed to cause of cancer to the radiation he received from the atomic bomb. I know that he did not keep in contact with any of the POW soldiers who were in Nagasaki with him.

I do remember that a Dutch author who was writing a book about the experiences of Dutch survivors of the atomic bomb in Nagasaki, came to visit my dad in San Diego to interview him, and that the book was published.  Unfortunately I do not have a copy of this book.  A local television  station in San Diego also did a televised interview with him, but I do not know which TV station it was or when it was done.  The only photos I have of my dad from those days are with me in it and since I was born in 1947, these photos of him in Dutch military uniform were after the war was over. A short biography of my dad is as follows:

Franciscus Snijders was born on October 26, 1916 on Java, Dutch South East Indies.  He passed away from Metastatic Cancer of the Thyroid, on December 12, 1995, in San Diego, California, USA.  At the time of his death he was 79 years old.  He was married to Jozephiene Wilhelmine (Duren) Snijders.

During his entire working life (until we emigrated to America), he was a member of the KNIL and then The Royal Dutch Army, his last station of assignment was at the Kromhout Kazerne in Utrecht, the town where we lived.  He retired with the rank of Adjudant.

During the war he was imprisoned by the Japanese and transported to Nagasaki, Japan on a ship.  There he was used as slave labor for the Japanese.
He was present in the POW camp Fukuoka14b in Nagasaki when the Americans dropped the atomic bomb on that city.